Unfair Claims of Greece over Crete and Rhodes

The Agreement on Limiting the Maritime Jurisdictions (the other two written EEZ declarations) signed between the Greek Republic and the Arab Republic of Egypt on 06/08/2020 is in violation of the 1982 United Nations Convention on the Law of the Sea (UNCLOS) to which Greece is a party.

It should be noted that Article 7 of the 1982 UNCLOS states that “In localities where the coastline is deeply indented and cut into, or if there is a fringe of islands along the coast in its immediate vicinity, the method of straight baselines joining appropriate points may be employed in drawing the baseline from which the breadth of the territorial sea is measured.” This provision is compatible with the characteristics of an archipelago. Greece, however, using the method of “Straight Baselines” while determining its territorial waters and drawing the lines by extending them to include Crete and Rhodes which can be seen in the map below in blue, leads Turkey into losing  most of its territorial waters. However about “Straight Baselines” the 3rd paragraph of Article 7 states that “The drawing of straight baselines must not depart to any appreciable extent from the general direction of the coast, and the sea areas lying within the lines must be sufficiently closely linked to the land domain to be subject to the regime of internal waters."

Studying the map above, it can be understood that the 2003 Sevilla Map has been tried to be imposed while it can also be seen that the Sevilla Map was drawn by extending the borders to Rhodes and Crete with the “Straight Baselines” method. The island of Crete is 51 nautical miles from the mainland of Greece, Rhodes is 186 nautical miles from Greek mainland that is less than 200 nautical miles as stated for the EEZ in the Convention, as it can be seen from the map above it does not fully complete the coast and it is essentially separated from the general direction of the coast.

Nevertheless, referring to Article 46 of the 1982 UNCLOS, Greece cannot be defined  as an “Archipelago State” because it is stated in the article that the state of the islands can  “completely” consist of one or more islands, whereas Greece is a peninsula state. While states such as the Bahamas, Fiji, Indonesia, Papua New Guinea and the Philippines are considered as “Island States,” Greece is not included in this group. For this reason, determining “Straight Baseline” from the surrounding islands such as Skyros, Crete and Rhodes is an open maritime law violation.

1982 UNCLOS connects the “Straight Baseline” drawing to the principles as follows;

In the examples below you may see the differences in “Normal Baseline” and “Straight Baseline” drawings from the world; 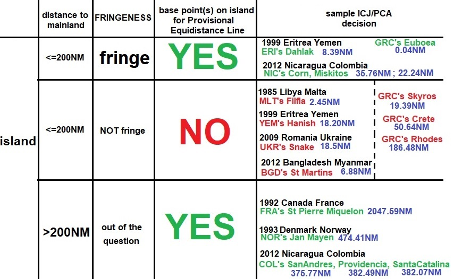 Above are the “Baseline” drawings in which eaves/ groups located at a distance of less than/ equal to 200 nautical miles are accepted by the International Court of Justice (ICJ) and the Permanent Court of Arbitration (PCA).

Finally, there are the “Principal Line” drawings, in which island eaves/ groups located at/ equal distance greater than/ equal to 200 nautical miles are accepted by the ICJ and PCA.

If an agreement on the Delimitation of Boundary Areas (EEZ) is to be made on the basis of the 1982 UNCLOS between Turkey and Greece, Greece needs to abandon its theses which are incompatible with the law of the sea  and states that the islands should be granted an EEZ as in the case of Crete and Rhodes Islands. Because the determination of the EEZ lines are established by taking the “Normal Baseline” or “ “Straight Baseline” rules as a reference from the territorial water lines. Both methods involve theses that will lead to Greece’s claims being considered as a violation of International Maritime Law.

Although the coastal state is given the freedom to determine the baseline, if the “Straight Basis” method is prefered it should only be put forward with hypotheses that can justify this claim.The International Law of the Sea determines that “Straight Baseline” can be drawn provided that the coastal topography complies with the principles of UNCLOS’ Article 7. Moreover, apart from the “Normal Baseline”  and “Straight Baseline” drawings, as a special condition Article 47 of the UNCLOS includes that the methods for determining the “Archipelago Baseline,” but this special method is only used in the “Archipelago State” in the Article 64 of the UNCLOS (Islands State/ Archipelago). It is clear that Greece cannot benefit from the special provisions in Article 47 of the UNCLOS since it is not an Islands State or an Archipelago.

As a result, Greece drawing  its territorial border between Crete and Rhodes as though there is no sea between them is not acceptable in terms of Turkey’s interests and are contrary to the law of the sea.